On April 26th the first EWM-NL took place at the Mathematical Institute of Utrecht University. Karma Dajani gave a talk on her personal experiences as the only female academic staff member in Utrecht and raised some important questions such as “why are there not more female mathematicians?”. In the discussion session afterwards, these and other issues were covered in smaller groups. The discussion continued during drinks in the library, which marked the end of the first meeting. 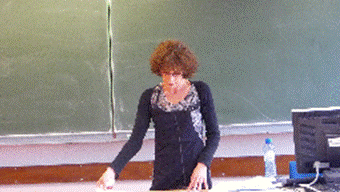